Get fresh music recommendations delivered to your inbox every Friday.
We've updated our Terms of Use. You can review the changes here.

by Chris Doyle and Danny Fisher-Lochhead 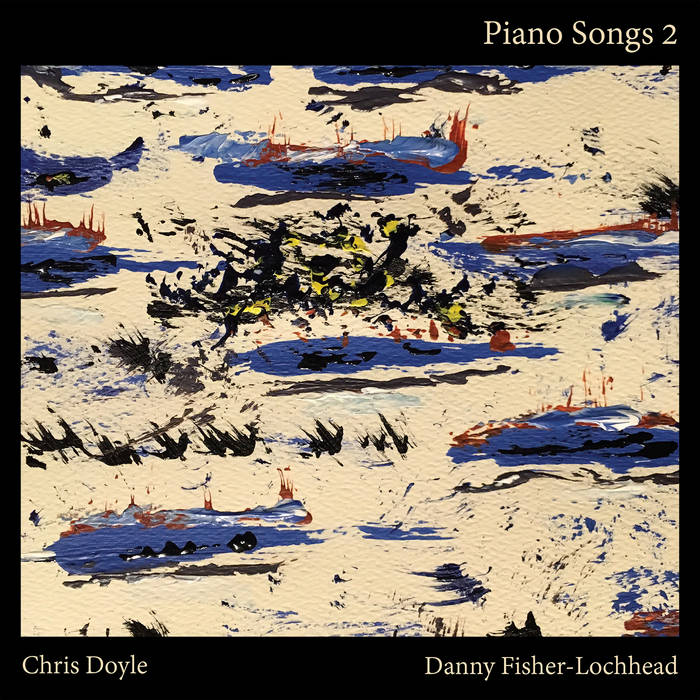 Matthew Schwach Really enjoyed these songs; kudos and thanks. The liner notes amplified the experience for me (both wonderful and that Chris Doyle has a way with both words and keyboards.) Oy! What a cover design!

In the Winter of 2015, after working on a large ensemble project for a while, I was compelled to work on something smaller and simpler that would require less logistical coordination and legwork. I decided to collect some of the songs I had been writing on piano, and send them to Chris Doyle to see what he would do with them. I had a fantasy that I would put the charts in the mail and we would have a record in a few months. Naturally, the process turned out to be more complicated than that. In July of 2017, I watched Chris perform his arrangements and accompanying improvisations without having heard anything of them or given any input. After that, we corresponded and brainstormed for another few months before recording in November of the same year at our friends' Ryan Blotnick and Keri Kimura's house in Manset, Maine. The result is a combination of the arrangements Chris made of the songs I wrote and improvisations he did with some input and direction by me. The unpredictable nature of collaboration has been at the heart of this project from the beginning, and the results are delightfully unlike what I might have come up with on my own. Chris took this project on completely and contributed his vision to it the entire way, shaping it and directing it. We're grateful to the many sensitive and attentive ears that helped to guide this process to where it is now, and we're excited to be releasing it into the wild.


In January of 2016 I received a manilla envelope in the mail full of handwritten scores and directions. Calligraphic pen on thick yellowed staff paper-- the familiar earmarks of Danny Fisher-Lochhead. The scores, sent from a New Yorker in Maine to a Mainer in New York, were the makings of an unfinished solo piano album, and the included directions provided a loose framework for a suggested order and some ideas on how to finish the compositions. "The Rhythmic Body" for example, was nearly complete, missing only a tempo. "Little Germ" was a few two-measure melody lines, with proposed counter melodies. Nothing was set in stone, and there was plenty to work with. Danny's compositions were, as usual, wonderful to get lost in. I was to arrange the pieces to completion, create improvisations for a few spots where Danny had envisioned a bridge or an improvised piece between compositions, and we agreed to have minimal contact over the creation of the album until it was finished. I enjoyed the newness of the idea and still appreciate Danny's trust in allowing me to complete his open-ended work.

The performance in July of 2017 was a bizarre and exhilarating experience for both of us - I had been working on the music intermittently for a year and a half and finally got to share it with Danny, who heard his compositions in their entirety for the first time on stage in front of him. The following November at the recording session, Danny and I had the chance to collaborate in a more traditional sense. Recording solo can be a confronting experience for the performer, but having Danny there to help guide the arrangements and improvisations made for a light atmosphere in which we could really dive into the material together. With the mixing and mastering expertise of Jacob Blumberg, the album moved through its final stages, and we're glad to share the results with you. Thanks for listening.

The music found here is from a number of different projects that I've lead in the past few years. The results are dissimilar in some ways although some inevitable threads of consistency can be drawn between them. I plan on continuing to release music on this site from whichever source it happens to come, whichever formulation speaks the most convincingly. ... more

Bandcamp Daily  your guide to the world of Bandcamp